Situated along a seckuded back road, a few miles west of the Wolds, Kingerby is a forgotten place.   The church long neglected and disused has been redundant since 1980, but thankfully is now in the care of the Churches Conservation Trust, who have lovingly restored it.   It is a wonderfully textured and weathered building, mostly built of ironstone with pantiled roofs and a fine array of furnishings that would be the envy of many churches.

You pass through a rather rustic porch, the jambs of the opening incorporating a bit of Early English dogtooth, into the south aisle.  There is an Early English south arcade and evidence of the existence of a similar north arcade built into the north wall of the nave.  The nave has a charming seventeenth century roof constructed from earlier reclaimed timbers.  In the north aisle is a poor box, roughly carved from a log and inscribed: 'THIS IS GODS TREASURY / CAST ONE MITE INTO IT 1639' .

Recesses and a bracket below the east window of the south aisle hint at the position of a medieval altar and in the window above is a considerable quantity of medieval glass.  This fourteenth century glass includes a crucifixion in the tracery and in the main lights, under canopies, figures of St Cecilia and St Katherine. The latter holds a martyrs palm and her attribute the wheel, which rather amusingly looks for all the world like a dartboard.

There are monuments: in the south aisle two rather battered fourteenth century effigies are believed to commemorate members of the Disney family of Norton Disney, who held the manor of Kingerby.  The effigies were formerly in the long vanished north aisle.  In the chancel is a further Disney memorial, a large coffin lid carved with a cross and the demi-effigy of a man under a canopy.  The stone is difficult to see as it is propped up at floor level against the south wall of the chancel.   On the north wall of the chancel are some fairly pleasant nineteenth cnetury tablets to the Youngs, a recusant local family and beneath them are a couple of old traceried bench ends incorporated into a kneeling desk.

The floors of rough stone and Lincolnshire sets adds to the atmosphere.  If you are in this part of the county this is not a church to be missed.

Access: There is plenty of roadside parking here and you will find the church unlocked. 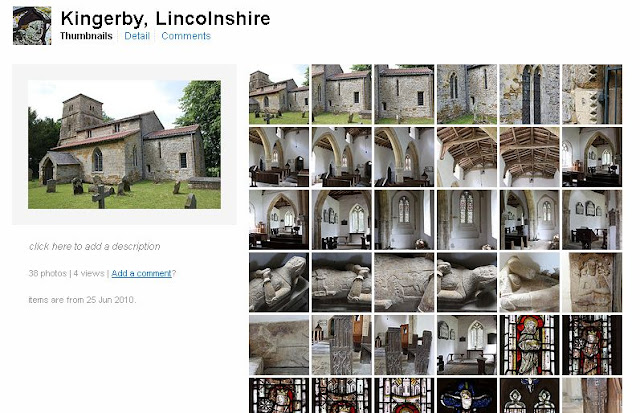 If you want to see some more photos of Kingerby have a look at my Flickr set.
Posted by Allan Barton at 01:56