St Martin's is not a particularly exciting church building.  Built in 1762-3 by J. Warner of Caistor using medieval masonry, externally it is plain, pedestrian, but pleasant.  Inside its white painted interior with apsidal east end, is sparse, forlorn and filthy.  Sadly all the eighteenth century furnishings, except the bird bath font, were removed in a restoration of 1888.

Access: The church is kept open during daylight hours.  There is plenty of roadside parking.

If you want to see some more photos of North Owersby look at my Flickr set.
Posted by Allan Barton at 02:26 No comments:

St Peter's in Normaby-by-Spital is not a great repository of monuments or a building of great atmosphere, it is a fairly straightforward sort of church.  Externally the earliest part of the church appears to be the lower stage of the west tower, which looks Norman.  I'm not convinced by Pevsner's designation of the tower as Early English. Externally the rest of the church appears to be Decorated and I suspect the rather short chancel has been truncated at some point, perhaps in Goddard's restoration in 1890.

Internally the most impressive feature is the fine north arcade, a late Norman masterpiece and worth travelling some distance to see.  Its glorious capitals have moukded square abaci decorated with glorious curling, serrated crockets and are set on sturdy pillars.  The south arcade is later, Early English, the capitals decorated with rather crude stiff-leaf.

There is little else to see, except for one or two nineteenth century tablets and font formed from a medieval kitchen mortar.  The church was declared redundant in 1975 and is now cared for by the Churches Conservation Trust

Access: The church is kept open during daylight hours.  There is ample parking by the roadside. 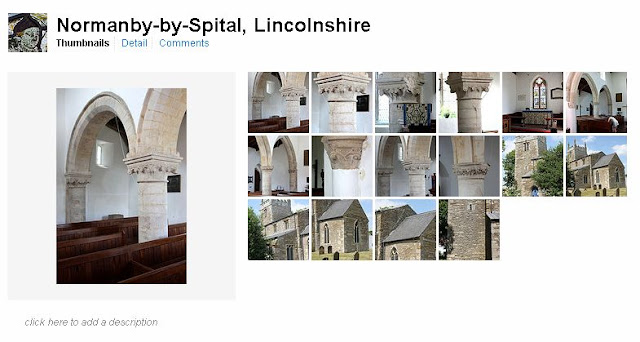 If you want to see some more photos of Normanby look in my Flickr set.
Posted by Allan Barton at 09:00 15 comments: