Great Sturton is a tiny hamlet in the sparsely populated Wolds, just a few miles to the north of Horncastle.  Like many Wolds churches, the parish church of All Saints, was originally built in the twelfth and thirteenth century, when the population of the Wolds was considerably greater.  As the population declined the building was gradually reduced in size and its exterior and interior walls show evidence of a lost north aisle, a west tower and the truncation of the chancel.

Long neglected, the church was restored in 1904 by J T Micklethwaite.  It was a sympathetic restoration and Micklethwaite retained the wonderful exterior texture of greenstone, ironstone and brick infill and blended his new furnishings with the old.  He added some new and inobtrusive windows to the mix of existing medieval and post medieval windows.

You enter the church through a tiny brick porch sheltering a Norman door into a spacious nave.  The west end of the church is taken up with the enormous and impressive frame of the Micklethwaite'e tiny bellcote, which he built from reused timbers probably brought from elsewhere.  On the north wall within this framework are the remains of an early seventeenth century mural painting supposed to represent Time and Death.  The figure of Death (a larger than life skeleton) is obvious, but the rest is fairly uninteligible.

The north arcade is exposed and on the mouldings of one arch arch are the substantial remains of attractive medieval painted decoration.  Sadly the interior of the nave is rather marred with radial heaters and pendant lights, suspended from the flat traceried ceiling.

A thirteenth century chancel arch with keel-moulded responds admits to the chancel.  There are commandment boards to either side of the east window and in the north wall a cusped niche, partly cut off when the chancel was shortened.  Next to the chancel arch is a plain marble tablet to William Settle, who came to Sturton as vicar in 1796 and died, still in post, in 1848 - a reminder that change comes slowly to these remote Wolds settlements.

Access: There is plenty of roadside parking and the church is kept open. 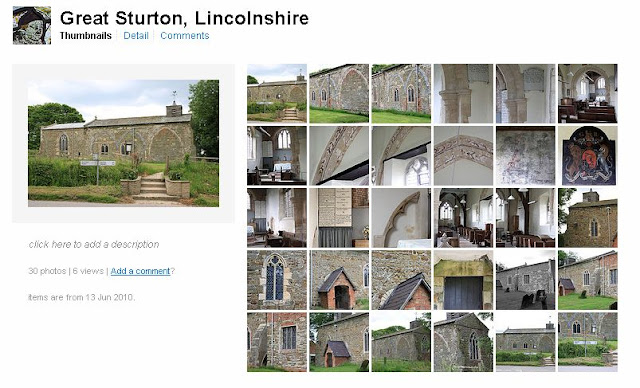 If you want to see some more photos of Great Sturton have look at my Flickr set.
Posted by Allan Barton at 03:32