Hainton is one of those rare places, a manor that has been in the possession of a single family for much of its recorded the history.  The church of St Mary stands in the grounds of Hainton Hall, which was and still is the home of the Heneage family.  The chancel and north chapel contain an unparelleled and virtually unbroken sequence of family monuments dating from the fifteenth century.

The earliest Heneage monument are the brasses to John Heneage (died 1435) a and his wife Alice on the chapel floor.  John, who is portrayed in civilian dress, was a yeoman and it was he that managed to acquire a share of the manor of Hainton that established the family in Hainton. The family fortunes were further bolstered in the early sixteenth century when the family profitted from the acquisition of former monastic lands.  It is interesting that although they benefitted from the monastic pillage of the 1530s, the family remained recusants, resolutely devoted to the old faith.

The impressive later sixteenth century monuments at the west end of the chapel, to John Heneage (died 1559) and his sons William died (1610) and George (died 1595) are evidence of this new found wealth. William's monument, showing him and his wives kneeling at prayer has a two little panels on the top showing the Fall, with Adam and Eve standing next to the Tree of Knowledge and the resurrection of Christ.

George Heneage is commemorated by a particularly lavish monument, a freestanding tomb chest with a painted alabaster effigy showing him an full armour lying on a rolled-up mat.

The east end of the chapel has later monuments.  One is a tablet by William Stanton commemorating grandfather, son and grandson, all called George. It is topped by a flaming urn and incorporates garlands and skulls and crossbones.  Next to it is the wall monument to great grandson also called George Heneage (died 1731) by Bertucinni.  His his bust set under a canopy with swags and his wives (both of good recusant families) are commemorated by busts flanking his and separate little tablets.

With such an impressive array of monuments you almost forget about the church itself.  The bottom of the tower is early Norman, but the rest of church is essentially by E J Willson who made all things new sometime between 1847 and 1848.  Willson, who is buried in the churchyard, was a close friend of A W Pugin and the building is Puginian in its archaeological correctness.

Access: The main body of the church is kept open, but the Heneage chapel is locked. There is plenty of roadside parking. 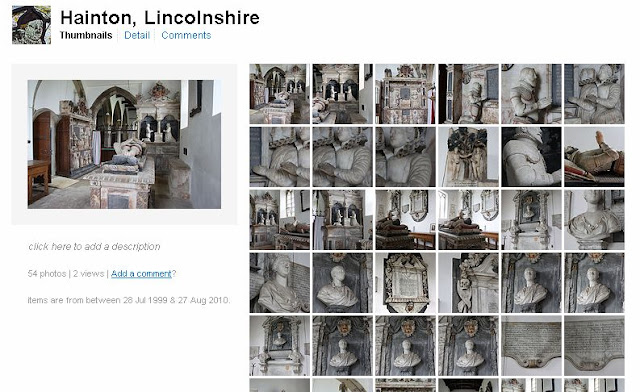 For more images from Hainton, have a look in my Flickr set
Posted by Allan Barton at 05:19