Nestling close to the glorious late Elizabethan Aubourn Hall, Aubourn 'Old Church' is just a fragment of a much larger medieval building.  In 1862 a new parish church was built to the west of the village and most of the medieval church was demolished, leaving the chancel standing as a mortuary chapel.  The shape of the lost portions of he church are marked out in the grass.  In a strange quirk of fate St Peter's was made redundant in 1973 and all but the chancel demolished and the medieval chancel of the 'Old Church' became the parish church once more.

There is much of interest crammed into this tiny thirteenth century chancel.  On the north wall are the remains of an alabaster monument to Sir Anthony Meres who died in 1587, his damaged kneeling figure propped on top of his coat of arms.  The monument was found in pieces in the demolished tower.  In the same north east corner are monuments to Sir Anthony's descendants, the Nevilles, who still live in the hall.  Elizabeth Neville, who died in 1745, has a lovely marble monument incorporating a medallion with her head in profile.  Next to it is a tablet in memory of Sir Christopher Neville, who died 1692, with cherubs and all the usual baroque flummeries.

The floor is made up of Neville ledger slabs, there are Neville hatchments, a royal arms of George II (1733), a balustered Georgian altar rails, a Perpendicular font and a west gallery with delightful little chamber organ.  All combine to make a very memorable little building.

Access:  The church is open during daylight hours.  Acess is on foot, via a footpath approximately 100 yards west of the entrance gates of Aubourn Hall.  The path takes you directly in front of the hall. Park with caution by the roadside. 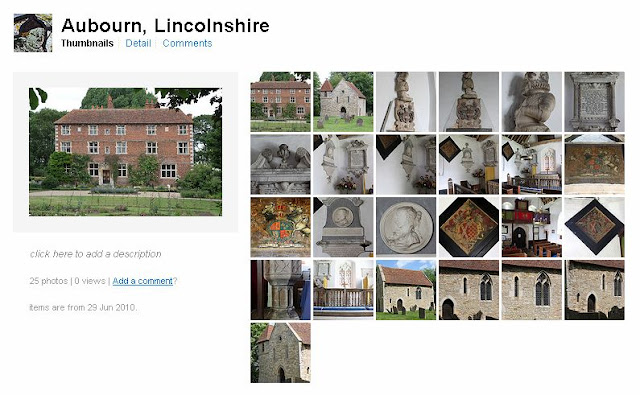 If you want to see some more photos of Aubourn look in my Flickr set.
Posted by Allan Barton at 09:00