Torksey is a place of great interest.  Built at the point where the Roman Foss Dyke meets the river Trent, the Romans established a town here called Tiovulfingacester.  In the seventh century St Paulinus baptised a great multitude of people in the river near Torksey, in the presence of King Edwin.  At the time of Domesday Book there were three thousand people living here and of all the settlements in Lincolnshire, only Lincoln and Stamford were larger.  In the Middle Ages as well as St Peter's, there were two other parish churches in Torksey, All Saints and St Mary's and two monasteries, a house of Augustinian Canons and the priory of Foss for Cistercian nuns. The settlement has shrunk to a quarter of its former size and all that is now left of this rich ecclesiastical heritage is St Peter's church.  The rendered nave of St Peter's, with its windows of 1821-2. doesn't look all that promising from the outside, but fetching the key is well worth the effort, for the plain exterior belies an interior that has much of interest that reflects the rich history of the place.  The north arcade is a fine example of Early English work, wit glorious stiff lead capitals and the font of slightly earlier is also decorated with a beautiful band of stiff leaf.  High up on the south wall of the nave is a rather battered figure with thin legs and its hands on its groin, clearly reset from elsewhere.  Some believe that it's a sheele-na-gig. If you go into the chancel lift the frontal of the altar and you will reveal quite a surprise, for the front of the stone altar is made from an incised slab of a woman with a dog at her feet, Lady Margaret, who died sometime in the fifteenth century.  She is said to have been prioress of the priory of Foss, but this is far from certain.

Access: The church is on a main road and parking is difficult.  I suggest parking in the car park of the Hume Arms opposite. The church is kept locked, but there is a keyholder notice. 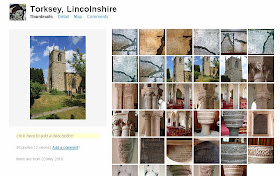 If you want to see some more photos of Torksey have a look at my Flickr set
Allan Barton at 12:30